Alleged non-paper on WB leaked: Merging of RS and Serbia, Kosovo and Albania 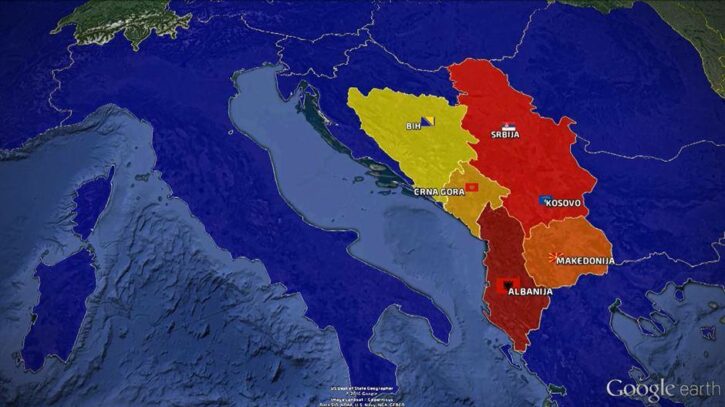 Slovenian online media outlet necenzurirano.si has published a document which they claim is the non-paper on the Western Balkans, allegedly sent by Slovenian Prime Minister Janez Jansa to Brussels, which sparked strong reactions in Bosnia and Herzegovina as parts of the document speak about redrawing of the country's borders.

The introductory part of the document published by the Slovenian outlet, for which they claim is the document that Jansa sent to European Council President Charles Michel, reads that the main issue of the Western Balkan region is the “unresolved national issues of Serbs, Albanians and Croatians.”

The agenda of any meetings between North Macedonia’s President Stevo Pendarovski and his Slovenian counterpart Borut Pahor did not include a possibility of border changes in the Balkans, Pendarovski’s office said in a statement on Thursday. Their last meeting when during Pahor’s visit to Skopje last September.

The key issues remain unresolved years later, says the document, even after the post-conflict peace that was established in the region with the efforts of the EU and NATO, and after two countries – North Macedonia and Montenegro made progress on its EU path.

“Based on the existing methods and rhythm of problem-solving, it is difficult to imagine the European perspective of Serbia and Kosovo, EU membership for Bosnia and Herzegovina is fully excluded,” reads the paper, which stresses that nobody is satisfied with the situation in BiH apart from few local politicians and Turkey, which takes advantage of “this empty period” by enhancing its influence in BiH.

The document offers a few solutions as well as suggestions on how to implement them.

It first mentions the unification of Kosovo and Albania, which Serbia would support if larger parts of Bosnia’s Serb-dominated region Republika Srpska are merged with Serbia. Also, it suggests the national issue of Croats would be solved if predominantly Croat cantons in BiH are merged with Croatia or “by granting a special status” to the Croat part of Bosnia and Herzegovina (using South Tyrol as a model).

“Bosniaks will thus gain an independently functioning state and assume full responsibility for it. A referendum is organised for the people to choose between the EU and a non-EU (Turkey) future. For the time being, a convincing majority of Bosniaks supports the EU perspective but, in the case of the continuation of the chaos and an increasingly stronger influence of Turkey and radical Islam, the situation can drastically deteriorate over the next decade,” reads the document.

According to this paper, some steps to achieve these goals are already underway and they include checking the possibilities to implement the plan with international and regional decision-makers.

“If the EU, the United States and the majority of the regional decision-makers agree with the plan and steps for its implementation, the EU seizes the initiative and formalises it,” it added.

The initial information about the alleged document was published by the Bosnian media outlet politicki.ba. It did not unveil the alleged non-paper’s content but said it was about redrawing of borders in the Western Balkans and “finishing the fall of Yugoslavia.” The information sparked reactions and prompted Bosnia Presidency member Zeljko Komsic to summon Slovenia’s Ambassador to BiH Zorica Bukinac for a meeting. She denied the allegations, saying that the policy of the Republic of Slovenia towards BiH has not changed and that her country supports Bosnia’s European path.

European Commission spokesperson also denied being aware of such document, stressing that European Union’s position on the Western Balkans and borders in the region is clear – “there is nothing to be changed on that.”