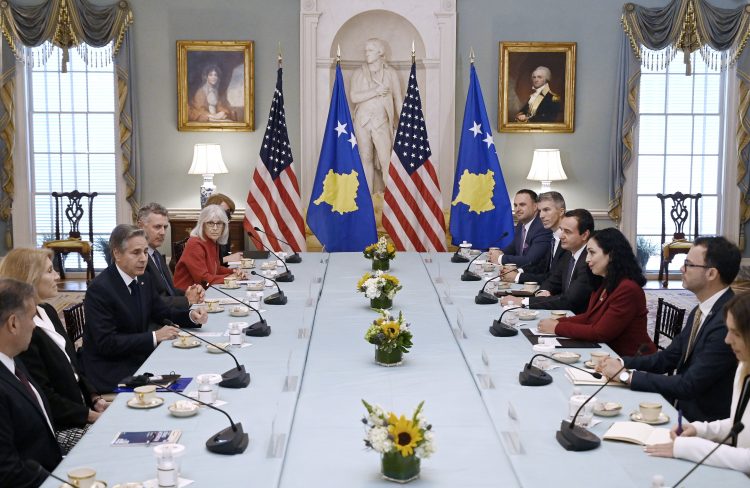 We are working together on defining issues of importance to the United States and to your country, said US Secretary of State Antony Blinken following his meeting with Kosovo delegation representatives Kosovo President Vjosa Osmani and Prime Minister Albin Kurti, Radio Free Europe (RFE) reported.

At a meeting in Washington Blinken thanked his guests for their generous hosting of at-risk Afghans and for their support for Ukraine.

He said they also discussed “critical issues of regional security”, but did not elaborate.

“The United States supports Kosovo’s Euro-Atlantic and international integration and the EU-facilitated Kosovo-Serbia Dialogue,” Blinken said in a Twitter post.

Osmani told the media that the meeting was excellent and that it was once again confirmed that “Kosovo does not have a bigger and better friend that the USA”.

She said they also discussed strengthening Kosovo’s international subjectivity, the need for Kosovo to join NATO, as well as “Kosovo’s constructive role in the dialogue with Serbia”, adding that they spoke in detail about some of the agreements reached in this process, such as the energy agreements.

The US administration was clear that the dialogue process should focus on mutual recognition “which was also confirmed at the meeting,” Osmani said.

Osmani said they also discussed Russia’s role in destabilizing the Western Balkans through its “satellite, Serbia”, adding she believes that Blinken and US President Joseph Biden “know well this history of Russia’s intentions in our region.”

The people of Kosovo stand by Ukraine, she said, noting that Pristina imposed sanctions on Russia “the same day the United States did”.

Kurti described the meeting with Blinken as “very cordial”, adding that they asked the US Secretary of State “to increase American investments in Kosovo”.

According to the FRE report, Blinken said Kosovo’s independence and sovereignty are irreversible and that building democratic and inclusive institutions requires persistence.

He voiced America’s support for the Pristina-Belgrade dialogue, adding he believes this process is a way to achieve an agreement on the normalization of relations that should be based on mutual recognition.