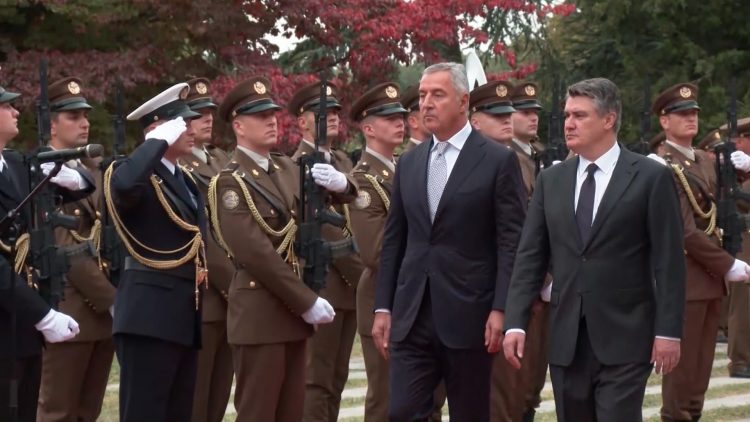 Croatian President Zoran Milanovic on Thursday received his Montenegrin counterpart Milo Djukanovic, and after the meeting, Milanovic told the press that he supported "the modern, civic and open Montenegro."

Commenting on the rising political and ethnic tensions triggered off by the recent inauguration of a Serbian Orthodox Church bishop in the Montenegrin city of Cetinje, Milanovic said that the Montenegrin head of state  as expected to pay a reciprocal visit to Zagreb anyway, however “the latest developments in Montenegro have accelerated it to happen.”

Djukanovic’s visit ensued the day after the opposition parties, led by Djukanovic’s Democratic Party of Socialists (DPS) demanded that a transitional government should be set up which would be tasked with calling early parliamentary elections.

Milanovic told the press conference in Zagreb that Djukanovic’s visit was an opportunity to extend support to “the modern, civic and open Montenegro”.

He went on to say that Croatia’s relations with Montenegro are good and commented that the relations had oscillations, however all that has been settled.

Milanovic went on to say that Montenegro, Albania and North Macedonia deserved a preferential treatment on their journey towards the European Union.

My duty is to attract the attention of those in EU who cannot see that to this fact, he added.

The Montenegrin president arrived in Zagreb on his first official visit abroad since the situation in his country has worsened with the 5 September enthronement of Joanikije in Cetinje.

Montenegrins perceive the ceremony held in the Montenegrin historical capital city as yet another attempt of Great Serbia advocates to exert their influence in Montenegro and negate the Montenegrin identity.

The current PM Krivokapic is believed to have risen to prominence during a series of protests in reaction to a law on religion in late 2019. Those protests were led by senior members of the Serbian Orthodox Church.

The original law proposed by Djukanovic’s DPS passed in late December 2019 — dubbed the ‘Law on Religious Freedoms’ — pledged to return all property granted to the Serb Orthodox Church after 1918, unless they had proof of ownership prior to that year. However, in the last elections, Krivokapić, supported by the Serbian Orthodox Church, managed to defeat Djukanovic’s party that was in power for 30 years.