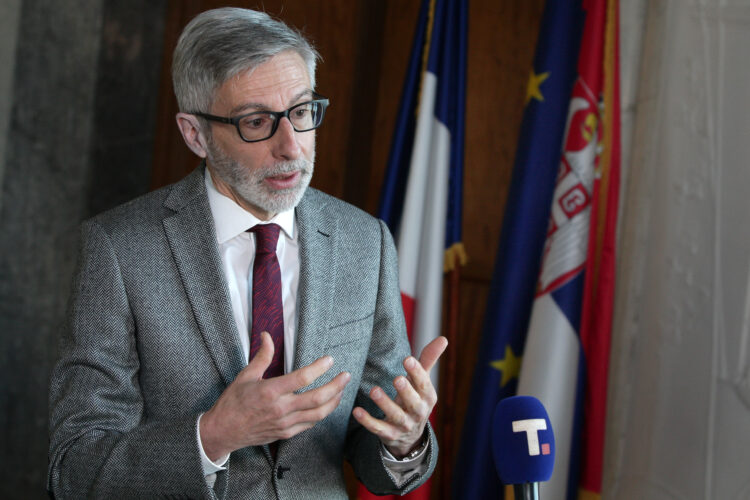 French Ambassador to Serbia Pierre Cochard said the aim of the Franco-German plan for Kosovo is to overcome the long-standing conflict to the benefit of the region and its population, adding that if the two sides refuse to go ahead with this proposal there will be consequences, but not in the form of sanctions, Fonet reported.

The Ambassador told Prva TV that France and Germany want to give new dynamics to the dialogue.

“The normalization of relations between Pristina and Belgrade has been set as a goal for over ten years. Now is the time to speed up this process, to the benefit of both sides and the entire region,” said Cochard.

Asked what the consequences would be if Serbia were to refuse the Franco-German plan, and whether sanctions against Serbia are an option, Cochard said he is not a participant in the negotiations, but that “they do not have a punitive approach towards Serbia.”

We are not talking about any sanctions or blackmail, we are presenting a way out of this situation that we believe is useful for this region and for the people, said the Ambassador, adding that consequences will follow if the proposal is rejected, but not in the form of sanctions.

From the very start, the normalization of relations between Belgrade and Pristina has been defined as an important element on Serbia’s path to the European Union (EU).

The Ambassador was also asked if the formation of the Community of Serb Municipalities should precede talks on the Franco-German proposal, to which he replied that he cannot say if there is a logical sequence but that it is true that the CSM has been agreed on and that it must be formed as soon as possible.

The German Ambassador hopes for a speedy formation of the CSM

German Ambassador to Serbia Anke Konrad said she hopes the Community of Serb Municipalities will soon be formed.

Regarding the unofficial information that the deadline for the formation of the CSM is April, while the signing of the Franco-German proposal is expected to take place by June, Konrad said she does not have that information, and that this is also a part of the negotiations.

Asked if changes to the draft agreement can at all be made in any negotiations, since the Franco-German proposal stipulates that Serbia will not oppose Pristina’s membership in international organizations, including the UN, Konrad said this is something that needs to be decided on in the negotiations.

We know that there are things that are difficult for both sides to accept, said Ambassador Konrad.