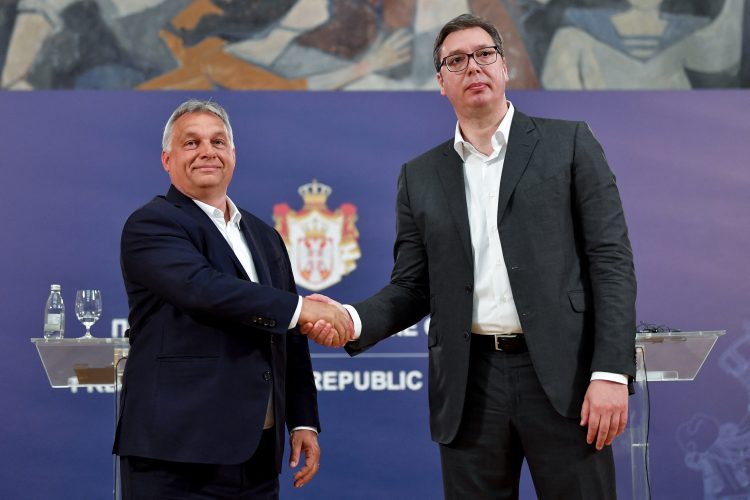 The London-based Financial Times daily said that ahead of elections in Serbia and Hungary to be held on the same day in April “are likely to underscore that, at least in these two countries, the malign internal trends will not fade away soon.”

The daily added that Serbia’s President Aleksandar Vucic and Hungarian Prime Minister Victor Orban “ have much in common even though Hungary belongs to the EU and Nato, the west’s premier institutions, and Serbia does not.”

It said that more than 30 years after central and eastern European countries introduced a multi-party political system, and that “achievement is under threat from two directions.”

Serbia holds presidential, early parliamentary and Belgrade elections on April 3. Vucic launched his Serbian Progressive Party (SNS) campaign a day after he called the vote. He still hasn’t confirmed he would run for the second presidential term.

Main opposition parties in Serbia boycotted the 2020 general elections claiming unfair conditions. It led to almost a unanimous parliament and forced the authorities to call an early general vote after a year and a half.

The European Parliament (EP) delegation mediated the inert-party dialogue in Serbia ahead of the 2020 and 2022 general votes to improve the election conditions. Unlike two years ago, the opposition would participate, though still unhappy with the whole process, but convinced it could score a good result at all levels, even winning in Belgrade.

The FT said that “the OSCE observers will visit Serbia” and Hungary regarding the elections in both countries. “One imagines they will be busier than during the 2020 parliamentary campaign (in Serbia), which opposition parties boycotted in a futile protest that let Vucic’s party walk off with more than 60 per cent of the vote. Yet the opposition has no chance of victory in a contest defined by Vucic’s domination of the media, state administration and public sector patronage.”

However, the daily said that “not everything is going smoothly for Vucic, who has concentrated power in his hands since 2014, first as prime minister and then as president. Precisely because national elections are lopsided contests, real opposition manifests itself not in Serbia’s rubber-stamp parliament but in sometimes very large, angry street protests. Such demonstrations forced the government last month to drop plans for a multibillion-euro lithium investment project with Rio Tinto, the mining company. If political change is to come to Serbia, popular protest may be its main source.”

The FT also said the EU “goes easy on Vucic because it yearns for Serbian co-operation on the Kosovo and Bosnia disputes,” recalling that “for a long time, it went easy on Orban because Fidesz, his party, belonged to the main centre-right EU group. Now Fidesz is out of that club, but Orban, like Vucic, is well-placed to stay in power. Strongman rule in central and eastern Europe reflects poorly on the EU, but its end is not in sight.”