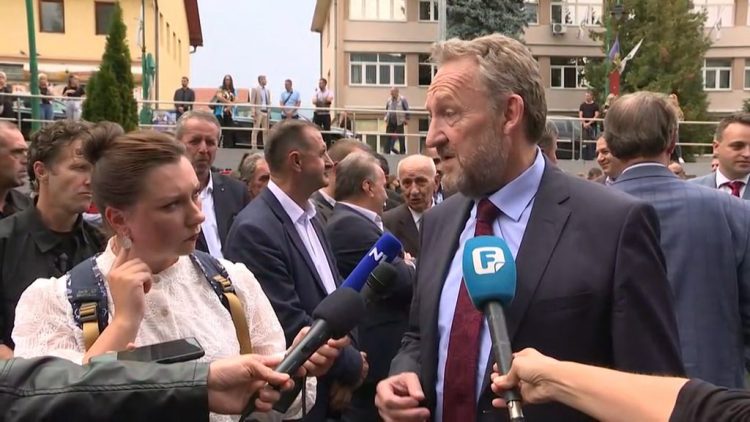 Instead of sending vaccines or “nice words” to Bosnia, Serbia and its president should stop persecuting those who defended the country during the war, the leader of BiH’s strongest Bosniak party, Bakir Izetbegovic, told the media on Friday.

The Party for Democratic Action (SDA) leader made the statement in light of the recent arrest of former top police official in Bosnia’s Federation (FBiH) entity, Edin Vranj. Vranj was arrested by Serbian police as he crossed the border based on allegations that he was involved in crimes against prisoners of war.

“We can expect things like this from Serbia, they keep repeating,” Izetbegovic said, noting that others, such as Husein Mujanovic, Osman Osmanovic and Ilija Jurisic, have also been arrested by Serbia in the past.

“We know of the tendency of Serbia to try to equalize the sides,” he said, arguing that Serbia is providing refuge to war crimes convict Novak Djukic.

“An omission was made by the Prosecutor’s Office of BiH. We have a protocol, signed by our Prosecution with Serbia’s Prosecution, which was supposed to prevent such things. Our Prosecution dealt with the case of Mr. Vranj, found that there was nothing there and concluded the case,” he said.

Izetbegovic argued that 148 children were killed and that several thousand people were killed and wounded in Vranj’s home town, Gorazde, without anybody facing justice for it.

Izetbegovic also argued that Serbia was involved in grave war crimes in BiH and that it is responsible for immense material damage in the country.

“We do not expect vaccines, grain or nice words from (Aleksandar) Vucic, or those funds that they owe us as reparations, but they must not do these things. They must not hide war criminals and not treat our defenders this way,” he said.