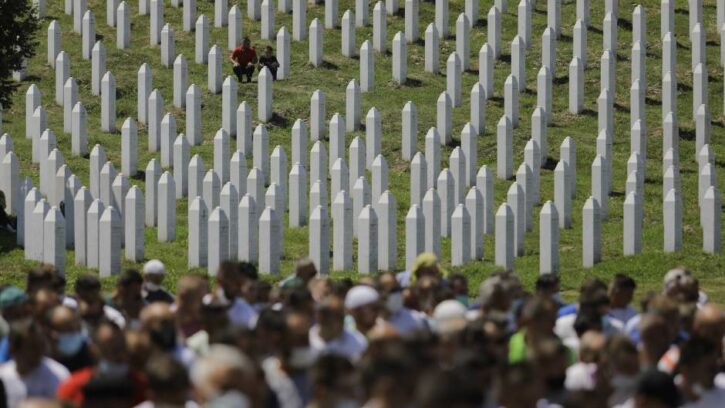 Nine human rights organisations called on Wednesday on Serbia's Health and Defence ministries to investigate how the 'Srebrenica – Official Lie of an Epoque' publication was made available in the COVID hospital at the Belgrade Stark Arena facility.

They also demanded an immediate withdrawal of the book from the hospital and other public or state facilities in which it was available.

The Belgrade independent Vreme weekly reported that COVID-19 patients in Stark Arena were offered three publications by ‘Pecat’ (Stamp), including the book denying the 1995 Srebrenica genocide.

The publication described the 8,000 Srebrenica victims as exaggerated, challenging the evidence, testimony of witnesses and forensic findings of the International Criminal Tribunal for the former Yugoslavia (ICTY).

The NGOs recalled that Serbia was the first and the only state which the International Court of Justice’s ruling declared responsible for violating the UN Convention on the Prevention and Punishment of the Crime of Genocide. The verdict said Serbia’s authorities had information but did nothing to prevent the genocide, the NGOs said.

„If Serbia’s state authorities keep silent about propaganda denying the Srebrenica genocide, it will be a sign they still follow Slobodan Milosevic’s regime policy,“ the NGO’s statement added.

Serbia’s authorities have so far refused to describe the war crime in Srebrenica as genocide. County’s Parliament adopted a resolution in 2010, saying: „The National Assembly of the Republic of Serbia strongly condemns the crime committed against the Bosniak population in Srebrenica in July 1995, in the manner determined by the judgment of the International Court of Justice…“