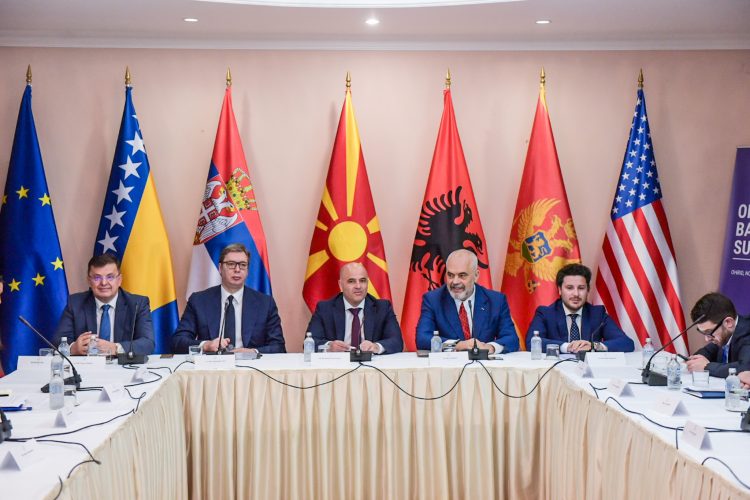 Leaders of Serbia, North Macedonia and Albania signed at the Open Balkan summit in Ohrid an agreement on mutual recognition of diplomas and academic titles and memoranda of understanding in the areas of culture, tourism and economy.

In addition to Serbian President Aleksandar Vucic, Albanian Prime Minister Edi Rama, and North Macedonia’s Prime Minister Dimitar Kovacevski as founders and members of the Open Balkan initiative, the summit was also attended by Montenegrin Prime Minister Dritan Abazovic and Chairman of the Council of Ministers of Bosnia and Herzegovina Zoran Tegeltija.

Vucic told a joint news conference that he believes the signed agreements will contribute to the development of relations between the three member countries. He said that all open issues were discussed, that trade between the three countries is “drastically increasing” and that progress has been made in political relations. “Even though I am always dissatisfied with myself, we have achieved quite a lot”, Vucic said.

Vucic said the idea of the Open Balkan Initiative was created by him and the leaders of North Macedonia and Albania. “This idea originated from here, no one else participated,” said Vucic when asked if Russia was involved in any way.

He thanked Albanian PM Edi Rama for standing firm “when there was pressure on us to give up on the idea of the Open Balkan initiative”, adding that “without his commitment, energy and strength, Open Balkan could not survive,” said Vucic.

Urging Kosovo to join the initiative, Albanian PM Edi Rama expressed hope that the Open Balkan summit would in future include six leaders. “I want there to be six of us,” said Rama.

US envoy for the Western Balkans Gabriel Escobar told the summit via video link earlier that Washington supports OBI but wants it to remain an important economic initiative not a political project and that it should remain focused on creating opportunities for the people of the region, adding that the initiative needs to remain open for all six countries of the region. European Commissioner Oliver Varhelyi spoke in Ohrid saying that the Open Balkan initiative could change the reality of the Western Balkans and speed up the path to the EU, adding that it is important because the countries of the region came up with the idea on their own.

Kovacevski said the Open Balkan Initiative enjoys strong support from the US and European Union. „The countries in the region have to become EU members, which is why we are opening new chapters of cooperation in the field of tourism and culture,” Kovacevski said and announced automated border crossing with a new electronic toll collection system. He stressed that the leaders of the initiative agreed to battle the economic crisis as well as shortages of food and fuels.

Abazovic said he saw “a definitely new face of the Western Balkans” in Ohrid. „All the topics that were discussed have to do with the citizens’ better living. This is definitely a new approach, a complete turnaround. I ask that there be six of us next time, and for the Open Balkan Initiative to have a growing number of participants. I would like to see this same makeup, reinforced by a sixth state (Kosovo), in Montenegro soon,” said Abazovic.

Tegeltija said that, following the Ohrid summit and the signing of agreements he was “even more convinced that Bosnia and Herzegovina must become a full member” of the Open Balkan Initiative.