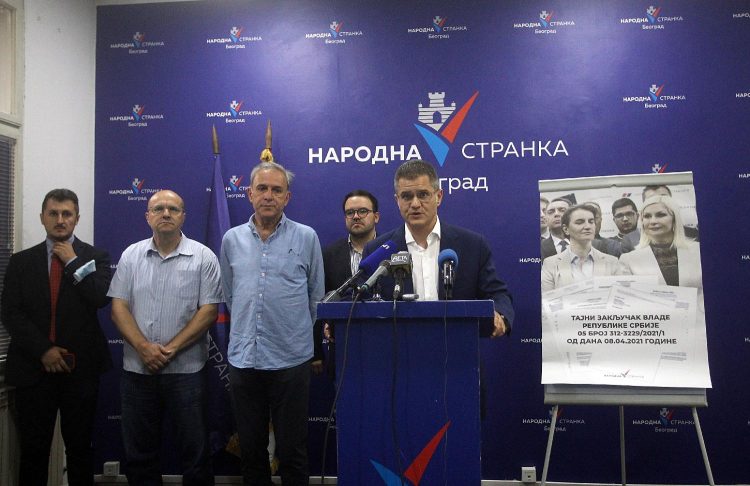 Opposition People’s Party leader Vuk Jeremic told reporters on Tuesday that the party filed criminal charges against the prime minister and the owners of the Millennium Team company alleging embezzlement in the construction of a gas pipeline.

Jeremic said the charges were filed against Prime Minister Ana Brnabic, Mining and Energy Minister Zorana Mihajlovic and the founders of Millennium Team Stojan Vujko and Ivan Bosnjak. He said they embezzled some 75 million Euro.

Millennium Team is a construction company specializing in energy industry infrastructure among other things. It has been alleged to have close contacts with the ruling Serbian Progressive Party (SNS) which is said to have awarded it a number of lucrative contracts. There have also been allegations of the company having made valuable gifts to the brother of a cabinet minister.

Jeremic told a news conference that the construction of a gas pipeline between Belgrade and the western Serbian city of Loznica was veiled in secrecy adding that the government document on the project was not available. A day earlier, Jeremic said that the pipeline was being constructed secretly for the needs of the Rio Tinto company which is planning to set up a lithium mining operation in the area around Loznica. Rio Tinto’s plans met with wide-spread opposition from locals in the area, the general public and the political opposition.

Jeremic said that the state-owned Srbijagas company launched procedures to negotiate with an unspecified company to build the pipeline. He showed reporters a document which he claims showed that the Millennium Team made an offer of 74.9 million Euro job in negotiations which lasted just 15 minutes, the lowest of six offers. He said the document was handed to him by an unnamed public administration official.

According to Jeremic, Millennium Team was suing his party and some media outlets demanding large amounts in damages to try to silence them.

Millennium Team reacted to Jeremic’s news conference in a press release which said that it would cooperate with the authorities, adding that Jeremic’s claims were nothing new. It said that the company had denied all allegations in detail. The company said it had no intention of silencing anyone through law suits which were filed because incorrect information was published.

Minister Mihajlovic also spoke up to say that Jeremic was trying to intimidate political rivals. Her press release said that Jeremic is “the leader of the Taliban part of the opposition” who is trying to draw attention to himself. She said that he does not realize that infrastructure projects can’t be launched in secrecy and denied that her ministry was involved in the public procurement process for the gas pipeline.