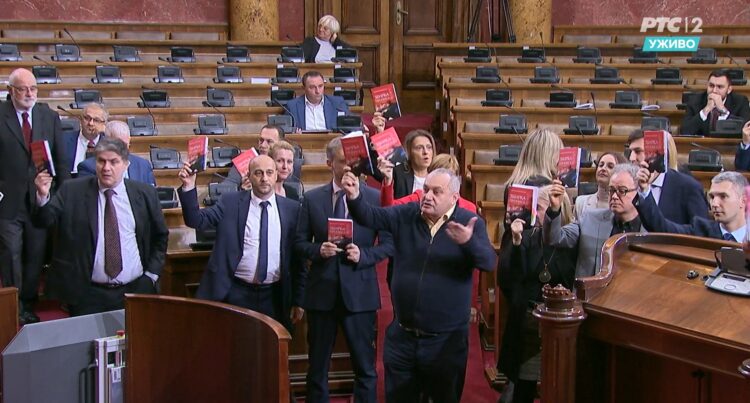 Opposition MPs blocked Wednesday's parliament session in protest over their treatment by Speaker Vladimir Orlic and his deputies from the ruling coalition.

Wednesday’s debate was full of opposition criticism of plans to build a national stadium at a huge cost with MPs trading accusations and insults. The session broke off after Orlic called a lunch break.

The opposition MPs first raised parliament rule books while standing in front of the speakers desk after deputy Speaker Sandar Bozic refused to allow them to speak on points of order. Bozic accused them of staging “political violence over the majority”.

The MPs went back to their seats after Bozic called on opposition MP Nebojsa Zelenovic to speak on a point of order but turned off the microphone and gave the floor to opposition NADA coalition MP Predrag Marsenic who submitted an amendment to next year’s budget.

They stood up again after a break when Speaker Orlic refused to allow MP Radomir Lazovic to speak.a