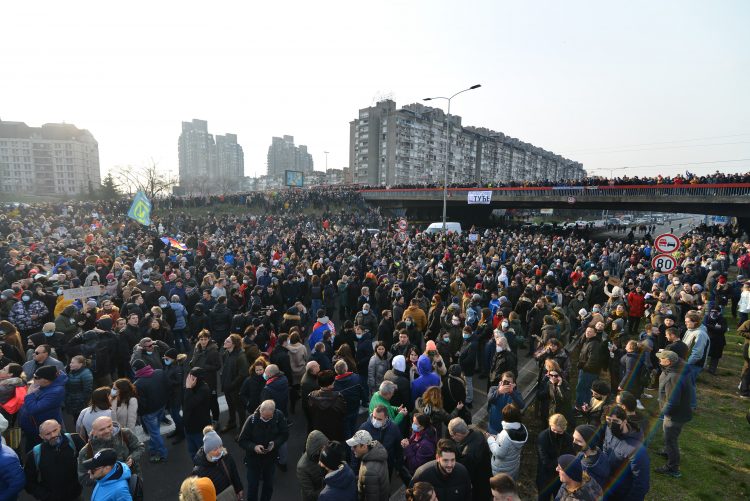 As announced, the environmentalists and their supporters in Serbia who oppose two laws they said were passed to pave the way for the Rio Tinto’s lithium mining blocked roads across the country at 2 pm on Saturday in substantially larger numbers than a week ago without visible police presence, while President Aleksandar Vucic suddenly appeared in the western Jadar area most affected by a potential mine and had lunch at a house of one villager.

N1 reporters across Serbia said many plainclothes police officers were present, and several drones were seen flying over the protesters in Belgrade.

Vucic first paid a brief visit to the western town of Sabac, where the most serious incident happened during last Saturday’s protest and arrived at the village of Gornje Nedeljice three hours before the start of the blockage.

In the meantime, the lawyers staged their protest outside Serbia’s Presidency building in Belgrade, saying would join the others later.

About 50 members of the Movement of Faith, Hope, Love from northern Kosovo blocked the administrative crossing of Merdare at noon on Saturday.

The head of that movement, Nemanja Sarovic, told the Belgrade Beta agency that the citizens blocked the crossing of Merdare because of the laws on referendum and expropriation and the arrival of Rio Tinto company, „but also because of Serbia’s President Aleksandar Vucic’s policy towards Kosovo and Metohija and implementation of Brussels agreements.“

He added that the citizens on Merdae blocked the traffic in both directions and that the protests would last until Aleksandar Vučić left power.

Unlike last Saturday, the uniformed police were not present after Vucic called on them to stay away. Also, no unknown people with hoodies, sticks, and hammers who attacked the demonstrators a week ago after the police were ordered to withdraw were seen close to the protesters.

In the meantime, an N1 journalist reported an incident in the northern city of Novi Sad when a group of men started provoking the protesters who then chase them and, as she could see, beaten of the provocators.

Vucic said he wanted to talk with the opponents of the laws, but the protest’s organisers NGO ‘Ne damo Jadar’ (we Don’t Give Jadar), said they would not meet him. Vucic earlier told reporters he carried a sleeping bag to wait for the activists to talk to him and added he would talk to some people inside the churchyard.

An NGO’s activist Marija Alimpic told N1 at Gornje Nedeljice that the NGO’s view was clear. “It’s not President’s jurisdiction to deal with these issues. He is violating the Constitution, what’s nothing new. We don’t want a meeting with him; accepting the talks would mean agreeing to negotiations. We don’t want the lithium mine; we demand the ‘Jadar’ project annulled.”

She added that Vucic did not contact them but that their view wouldn’t change even if he were.

Talking to reporters in Sabac earlier on Saturday, Vucic said that “neither (John) Rockefeller nor (the leader of the ‘Go – Change’ NGO Savo) Manojlovic would lead Serbia,” alluding at the regime’s propaganda that the environmentalists were paid from abroad to dethrone him.