Vucic at pre-election rally: The people of Serbia do not want to join NATO 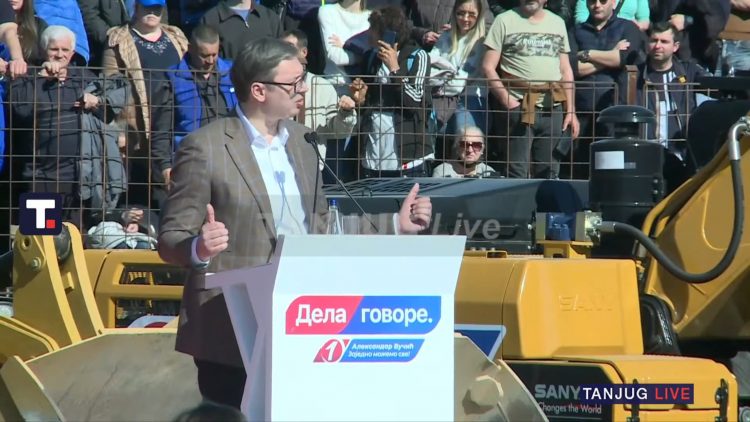 The people of Serbia do not want to join NATO and that is why they will know how to vote on April 3, Serbia’s President, Aleksandar Vucic, said at the first pre-election rally of his Serbian Progressive Party (SNS) in Merosina.

Vucic said that the people of Serbia people want military neutrality and a strong army to protect the country’s sovereignty.

He announced that “the people will be happy” the military systems Serbia has which are “among the most powerful weapons in the world“ and that the country will no longer be easy prey for anyone.

Vucic also commented on the situation in the world at the moment.

„If there is a conflict, and I hope it will not be – there will be no wheat, gas, oil or derivatives, and the question is how much salt and oil there will be – we have enough today,“ said Vucic, reminding that the territory Serbia has no oil, gas or salt.

„But we are increasing the reserves of oil and gas, and we will procure salt,“ he promised.

As for foreign policy, he said that Serbia will always have its own policy, be on the European path, maintain good relations with the United States, but that it will not spoil relations with Russia and China.

„We have friends in both the east and the west, and no one can change our policy, and that is the only policy with which Serbia can survive,“ Vucic said, adding that this policy is a guarantee for the security of the Serb people in the region.

„They would expel them (Serbs) from Kosovo and destroy the (Bosnia’s entity) Republika Srpska immediately, but they know that today a much stronger Serbia will not allow that,“ he said.