Vucic on dialogue: Poor meeting; Kurti: Serbia must face past 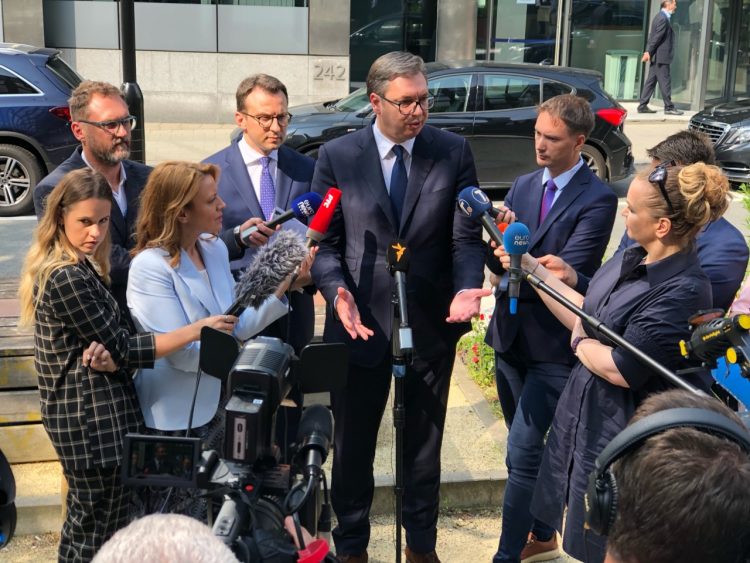 Serbia's President Aleksandar Vucic said that the talks with the Kosovo delegation in Brussels on Monday mediated by the European Union were poor, unpleasant and added the Albanians spoke only about three genocides Serbia allegedly committed, while Kosovo's Prime Minister insisted Serbia should face the past.

Speaking to reporters in Brussels after the meeting, he added Serbia accepted all three points for negotiations suggested by the EU and that Kosovo welcomed none.

Vucic listed the three suggestions as intensifying joint efforts to identify the remains of the missing people, refraining from activities that could destabilise the situation on the ground, and having preparatory meetings for chief negotiators’ talks once a month.

He said the refusal to prevent the destabilisation was particularly worrying, primarily since Belgrade provided a list of 80 ethnically motivated incidents against the Serbs in Kosovo this year.

Speaking to N1’s Nikola Radisic, Vucic said that „we are not talking about a rational principle, but we speak to people who only demand Serbia’s responsibility for a geocode in the continuum. That is all they are interested in.

Asked where all that could lead since the centuries-old issue had been opened in the dialogue, Vucic said that „issues are not opened, they open them.“

He added that everything agreed in the preparation for the dialogue with the participation of the EU special envoy Miroslav Lajčák, the main negotiators agreed to be on the agenda and that Serbia accepted it all, including some of Pristina’s amendments.

Kurti told reporters what Vucic said was „a lie“ and that Kosovo’s side accepted the EU suggestions and added he insisted Serbia should face the past.

He added he never said the Serbs were a genocidal nation, but that Serbia’s state committed the genocides.

Ahead of Vucic – Kurti meeting, the EU High Representative Josep Borrell said both Kosovo and Serbia needed „to close their painful past by reaching a comprehensive and legally binding agreement on the normalisation of their relations, to achieve a European future for their citizens.“

„The future is most important than the past. The past is important, but we should look forward to the future because we can only then see the European perspective for Serbia and Kosovo… But that is not up to the EU to decide but to them,“ Borrell said.

Vucic added that „we could not agree on anything,“ adding that „last time here in Brussels, I thought we couldn’t have a worse meeting, but today I saw it was possible.“

He added the Albanians conditioned the dialogue with „some new political criteria“ and blamed Serbia for three alleged genocides committed in Kosovo – the first in the 19th century and the last in the 1998-1999 war there.