Vucic: Operation Storm is no myth, we do not dream of revenge, we want peace 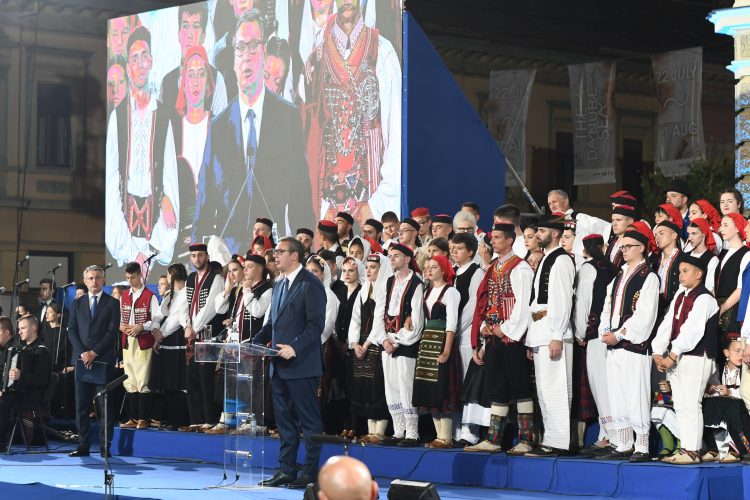 The central commemoration for victims of the Croatian military operation Storm on its 27th anniversary was held at the main city square in Novi Sad. Serbian Patriarch Porfirije served a memorial service for the victims and the crowd was addressed by Serbian President Aleksandar Vucic and Milorad Dodik, the Serb member of Bosnia and Herzegovina's tripartite Presidency.

The operation Storm began on August 4, 1995 when Croatia launched a military offensive in the then Republic of Srpska Krajina. Around 250,000 Serbs fled their homes, 1,881 people were killed and, according to the Documentation and Information Centre Veritas, 654 people are still listed as missing.

Vucic said that the operation Storm is not a myth, but stressed that “we don’t dream of revenge and of moving the borders”.

“We will kneel for peace”, said the President, adding that this is the ninth consecutive year that the state is in this way marking the pogrom and, as he said, the biggest ethnic cleansing of a people.

“There are two reasons why we are here. The first is because of those who were killed and exiled, the other is to remember. It is as if there were no witnesses in Serbia for years to the crimes against the Serbs. This means that we, ourselves, stoned the saddest column in our history. During this time of oblivion Serbia deteriorated,” Vucic said.

Dodik said that, if it were not for one man – Serbian President Aleksandar Vucic – the forgetting of the victims who lost their lives in the operation Storm would have been “epic”.

“We are slowly recovering, aware that we can survive only if assembled and united. I was not born in Serbia, but Serbia is my country, Republika Srpska is my country. Our unity will have to come. To see Serbia and Republika Srpska, to defend the Serbian people,” Dodik said, adding that, when Serbs fled Krajina, they left their houses unlocked, but they locked their homeland in their hearts.

Serbian Patriarch Porfirije said „We bow to their victims (…) our remembering is not about holding a grudge.”

“We remember so no one could say ‘it never happened’. I will repeat a hundred times that we are not holding a grudge (…) we must forgive, God commands us to, but we will not forget, we must not and we cannot,” the Patriarch said.