Vucic: Our oath is to protect Serbs everywhere; Dodik: Our country is Serbia 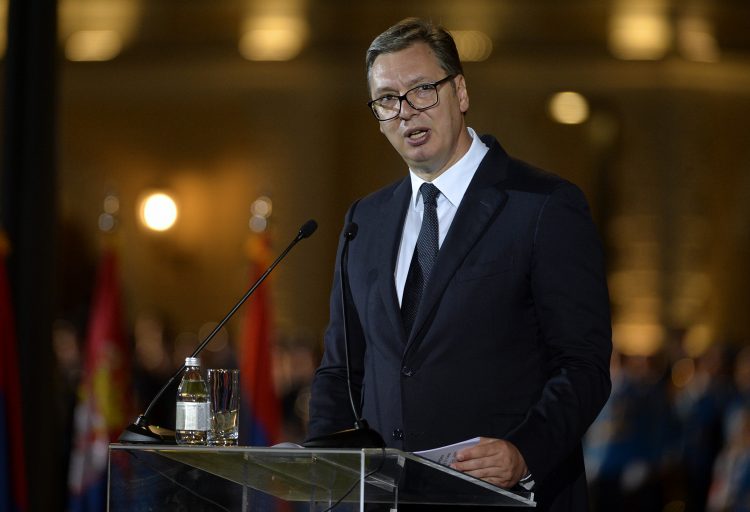 Addressing the crowd gathered at the 'Serb Unity, Freedom and Flag' holiday ceremony in Belgrade, President Aleksandar Vucic promised to "to make the country stronger, more powerful, able to help (Serb-dominated semi-autonomous entity in BiH) Republika Srpska without interfering with Bosnia and Herzegovina's rights, to help our people in Montenegro and everywhere on the globe and protect every Serb from persecution."

He then listed all places where the Serbs were victims during WW II and 1991-1995 conflicts in former Yugoslavia and after that in Kosovo, pledging nothing like that would happen again.

„That’s our oath,“ the President said.

Referring to comments from the region about his call to the Serbs everywhere to display Serbia’s flags in the countries they live, Vucic said: „I don’t think about apologising to you, for your fabrications, or anything.“

And then reiterated that „with all my strength and soul – I will lead Serbia to be even stronger.“

The Serbian Orthodox Church (SPC) Patriarh Porfirije and the Serb member of the Bosnian tripartite Presidency Milorad Dodik joined Vucic at the ceremony.

Dodik spoke before Vucic, saying the Bosnian Serbs’ country „is not BiH, our country is Serbia.“

„We are not Bosnians, we are Serbs, I am a Serb, Orthodox, I speak Serbian, I write in Cyrillic, my family saint is St. George, and nothing identifies me with the word Bosnian. Neither in the native nor the character sense, so I just ask you to say that we are Serbs because we are,“ Dodik told the crowd.

He praised the SPC for its role in preserving the Serb identity.

Dodik said the Serbs „behave simply normally,“ adding he could not understand why they provoked the others’ anger.

„We only want what is ours. We don’t want to change or assimilate the others, though we experienced much of that,“ he said.

Dodik added the Serbs in Republika Srpska felt Serbia was their fatherland. „We have our republic, but our fatherland is Serbia, our country is not BiH, it’s Serbia.“