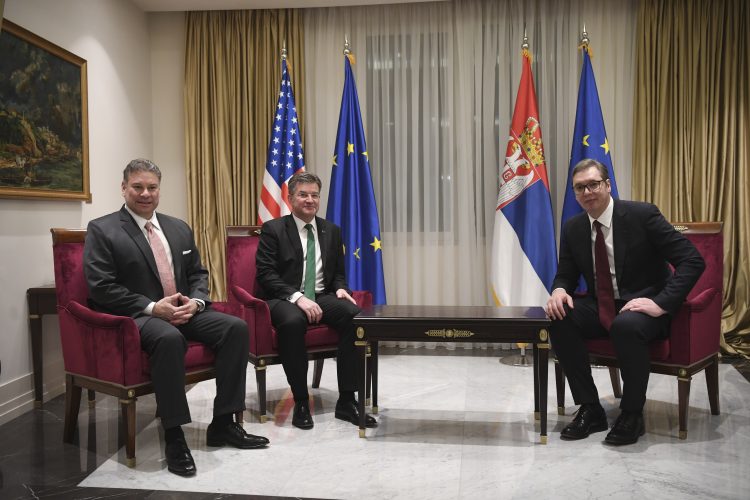 In a trilateral meeting with Gabriel Escobar, the US envoy for the Western Balkans and his European Union counterpart Miroslav Lajčák, on Wednesday night, Serbia's President Aleksandar Vucic accused Pristina of avoiding its obligations from the dialogue with Belgrade and praised his country for being responsible.

They discussed critical topics for Serbia’s and  Western Balkans’ sustainable economic future and the stability of the whole region, according to Vucic’s office.

The President underlined that as a serious and reliable partner in all valid and signed agreements, Serbia acted responsibly and fulfilled its obligations while encountering continuous attempts by Pristina’s authorities to provoke and avoid meeting their obligations unilaterally.

That, Vucic said, greatly hindered the further course of the dialogue.

Vucic’s office statement added that Escobar and Lajčák said their support of the continuation of a constructive dialogue between Belgrade and Pristina and the integration of the Western Balkans into the EU underling both sides needed to fulfil all obligations.

According to the statement, Lajčák said the EU and the US worked closely together and shared the same vision for the dialogue process and the future of the entire region in the EU, adding that their efforts aimed to achieve a comprehensive agreement the implementation of all previous agreements signed.

Vucic thanked the two officials for their commitment and said he believed only with responsible efforts of both sides in the dialogue could reach a compromise solution and common language in the interest of both Serbs and Albanians and Serbia’s and the whole region’s European future.

Just finished a constructive and substantive discussion with @predsednikrs @avucic in Belgrade about the way forward in the EU-facilitated Dialogue on normalisation of relations. pic.twitter.com/gHA9z77VQ7

Before the trilateral meeting, Vucic had separate talks with Escobar, Deputy Assistant Secretary of State for European Affairs responsible for the South Central European portfolio and Lajčák, EU Special representative for the dialogue and other Western Balkan regional issues.

After meeting Escobar, Vucic said on his Instagram profile he had „important talks“ with the US diplomat.

The two spent Monday and Tuesday in Pristina for meetings with Kosovo’s leaders in an attempt to revive the top-level Belgrade – Pristina dialogue on the normalisation of relations.

Ivica Dacic, Serbia’s Parliament Speaker, met with Escobar later on Wednesday and told him that the Constitutional changes supported in a referendum would be confirmed by the Parliament next week.

According to Dacic’s office statement, Escobar said he was convinced the April 3 elections in Serbia would be fair, held in a democratic atmosphere with the participation of all political parties.